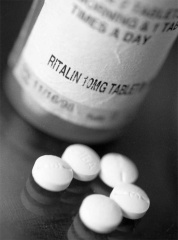 Ritalin abuse can lead to addiction, a chronic and relapsing condition where a person struggles to control their drug use.

Methylphenidate, or its brand name Ritalin, is a stimulant ADHD medication that is prescribed to adults and children who have difficulty concentrating, staying still, and controlling their actions for the same amount of time as other individuals their age. According to the NLM, Ritalin “is also used to treat narcolepsy (a sleep disorder that causes excessive daytime sleepiness and sudden attacks of sleep).” Ritalin can be a very helpful medication, but unfortunately, it is also habit-forming.

Those who abuse Ritalin for the euphoric effects it can cause in high doses (or for the purposes of academic performance or weight loss) can become addicted to the drug. Ritalin addiction can be easily determined if you know the signs and symptoms for which to look, and treatment will be necessary for the addicted individual.

According to the NCBI, “It is estimated that 4.1 million people 12 and older in the United States in 2003 had used methylphenidate [Ritalin] without a physician’s prescription at least once in their lifetime.” This is drug abuse, as Ritalin is a prescription drug and is not meant to be taken in higher doses or more frequent doses than prescribed or without the prescription of a doctor. While there are many individuals who abuse Ritalin for different effects, addiction to Ritalin occurs after continued abuse of the drug.

Ritalin abusers who take high doses of Ritalin and/or take it chronically are especially in danger of becoming addicted to the drug. College students are also especially susceptible, as the abuse of Ritalin and other stimulant drugs is more likely to happen to full-time college students (SAMHSA states “twice as likely” in the case of Adderall). Ritalin addiction still occurs, especially in these situations, and should be treated in formal drug rehab in order for the individual to recover.

Other signs of Ritalin addiction may include:

The symptoms of Ritalin addiction will be obvious to the individual abusing the drug. If you abuse Ritalin chronically and are worried that you may be addicted, ask yourself the questions below to find out.

If you feel these issues describe you, it is very likely that you are already addicted to Ritalin. Those who abuse Ritalin chronically will often become addicted without realizing it. Their grades in school will suffer, they will begin acting strangely, and they will need treatment to be able to stop abusing the drug.