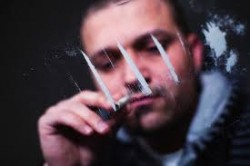 Cocaine is a highly addictive drug with serious psychological and physical consequences.

Cocaine is the potent psychoactive chemical that comes from the leaves of the coca plant. For centuries, the leaves of these plants were used for their energizing and anesthetic properties and to speed up breathing to counter the effects of living in the high altitudes of Peru.

Cocaine is highly addictive and classified as a Schedule II controlled substance by the DEA. It stimulates the brain and central nervous system to produce an intense euphoria and increase alertness, heart rate, respiration, and energy, but, the effects of cocaine addiction are much more sinister.

Cocaine addiction begins with an occasional use of cocaine that quickly conditions the brain to want more. Cocaine usually comes in the form of a white powdery substance that can be snorted or diluted and injected. It’s also abused by methods of smoking crack or freebase cocaine for an immediate and intense high. The phenomenon of crack use was first reported in 1974 in California and by 1980, had spread throughout the United States.

As the person continues using cocaine, they develop a tolerance to the drug that requires more of it to elicit the desired effects. The more euphoria the person experiences from cocaine use, and the more frequently they use it, the greater their dependence risks become.

Repeat cocaine use results in cravings, withdrawals upon cessation of use, and adverse physiological, behavioral, and social consequences. According to the Center for Substance Abuse Treatment, “Cravings for the stimulant’s effects tend to linger, even after abstinence has been achieved, and the potential for relapse is high.” Adaptations within the brain reinforce the continued behaviors of use, despite negative consequences, which is the nature of addiction.

There are many signs of cocaine addiction. Some are subtle and indistinguishable from other problematic behaviors or addictions and others point directly to cocaine. Cocaine addiction changes the person in ways that often places them at odd with their families, loved ones, employers, and society

Some most recognizable signs of cocaine addiction may include:

There is no safe way of using cocaine. Every dose is unpredictable in potency and contains variant chemicals from processing and extraction along with those that are used to “cut” the product. In 2011, according to the Drug Abuse Warning Network, cocaine was involved in 505,224 emergency department visits involving illicit drug misuse or abuse. Overdoses can occur because of; compromised physical or mental health, use in combination with alcohol or other drugs such as heroin to enhance the high, taking high dosages or frequently, and unexpected reactions.

Cocaine addict tend to have bad physical health due to use combined with hunger, sleep, and health care deprivations. They may become too “stressed out” to perform normal activities and problems become more dangerous as; the physical and mental impairments set in, the addict participates in riskier behaviors such as unsafe sex, criminal activities to obtain the drug, or begin to inject it.

The most common physical symptoms of cocaine addiction are:

Cocaine addiction causes repeat disruptions in the chemical and neurological processes of the person’s brain and central nervous system. Over time, damages can result in neurological impairment that leave the person with adverse mental health issues that may be long-term or permanent. In studies of neuroscience, addictions to powerful substances like cocaine can make the person oblivious to the fact that the usage is wrong.

While under intoxication, nerve cells can be over-stimulated causing nervousness, anxiety, panic, paranoia, restlessness, and agitation. Many cocaine addicts are also poly-substance users or have mental health disorders preceding the cocaine use, exacerbated by it, or caused by it. This is cause for alarm because the side effects of use and addiction can be unpredictable in even the most experienced of users.

Other psychological symptoms of cocaine addiction are: