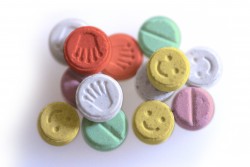 Ecstasy often comes in a pressed pill form, and it’s hard to verify whether or not it contains other substances.

According to CESAR, MDMA or methylenedioxymethamphetamine “is the chemical found in the synthetic ‘club drug’ ecstasy, a drug with stimulant and hallucinogenic effects.” It can also be known as E, ADAM, candy canes, X, or molly. Most of the time, ecstasy tablets contain other drugs as well, but the drug itself is habit-forming and can cause addictive behavior in individuals who abuse it chronically.

Ecstasy addiction can also cause many other physical and mental issues for users as well as problems for their loved ones. When someone become addicted to ecstasy, there are signs and symptoms that can help point to the problem, and ecstasy addicts should attend treatment in order to achieve a more stable recovery.

As stated by the NIDA, “According to the 2004 National Survey on Drug Use and Health, more than 11 million people have tried MDMA at least once.” Although using the drug once has dangers of its own (heat exhaustion, dehydration, coma, death), people who become addicted to ecstasy are those who abuse it over a long period of time.

There is still some debate about whether or not ecstasy causes addiction, but many individuals who have abused the drug for long periods of time attest to having experienced withdrawal symptoms, tolerance for the drug’s effects, physical and psychological dependence on ecstasy, and a desire to continue abusing the drug, despite the harmful effects it has on them. These are all strong signs of addiction, and long-term ecstasy abusers experience these and more as the signs and symptoms of ecstasy addiction.

Acute ecstasy abuse can cause problems such as heat exhaustion and dehydration which, if left unchecked and in a place like a club with its own heat-causing issues, can become deadly. There are other signs a person will exhibit as a result of ecstasy intoxication, but with an addiction to the drug, they will be constant. These are:

Someone who is feeling the effects of ecstasy will experience euphoria, empathy for the feelings of others, anxiety, and other strong emotional responses. However, over time, the effects of ecstasy can cause intense signs that a person may be addicted to the drug. If you notice these signs in a loved one, there is a possibility that their ecstasy abuse has turned into an addiction:

The signs of ecstasy addiction also include an increase in risky behavior (especially sexual behavior). This can lead to the individual getting HIV, hepatitis B or C, or another disease that could be transmitted through the kind of risky sexual behavior that is common in long-term ecstasy abusers. The person may also be extremely secretive about their drug use and attempt to hide any use of ecstasy from others as they may realize that it is dangerous for them and will still not want to stop.

If you are an ecstasy user, you should understand the potential for addiction and the symptoms that you should be aware of. For example, someone who is addicted to ecstasy will experience:

Pay attention to yourself and ask yourself whether or not you may be addicted to ecstasy. The drug can be extremely intense, and those who abuse it regularly may experience the symptoms of addiction.