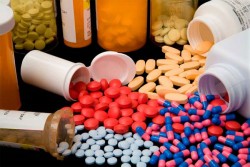 Prescription drugs are pervasive in today’s society, and many of them have a high potential for abuse and addiction, causing addiction rates to rise.

According to SAMHSA, “Prescription drug misuse and abuse is the intentional or unintentional use of medication without a prescription, in a way other than prescribed, or for the experience or feeling it causes.” Over time, prescription drug abuse can become addiction which causes problems in a person’s life that can involve their professional, personal, health, financial, and legal situations. Because prescription drugs are used medically and prescribed by doctors, many individuals feel that they are safer or less addictive than illicit drugs. This could not be further from the truth.

There are several types of commonly abused prescription drugs, according to the NIDA, and they all may lead to addiction if the individual abuses them long enough and in high enough doses. They are:

The abuse of any of these drugs can cause addiction and other health and medical issues. When a person becomes addicted to prescription drugs, it can be very dangerous and lead to just as many issues as the abuse of illicit drugs.

But how can you know that someone is addicted to prescription drugs? It can be difficult to tell, as the different drugs cause different intoxication effects. However, many of the behavioral effects of having an addiction are similar and common among all drug addicted individuals. They are

Someone who is truly addicted to prescription drugs will experience a “lack of control over [their] drug abuse.” And in some cases, it will only become worse and lead to illicit drug abuse. The ONDCP states, “data from the National Survey on Drug Use and Health (NSDUH) show that nearly one-third of people aged 12 and over who used drugs for the first time in 2009 began by using a prescription drug non-medically.” These types of addictions are dangerous and can lead to even more harmful consequences.

Specific prescription drugs have certain signs that point to abuse and possibly addiction. If the signs below seem constant in an individual you know, there is a strong possibility that they may already be addicted to a prescription drug.

If you have been abusing prescription drugs (either knowingly or unknowingly), there is a chance that you might be addicted to them. When a person abuses these drugs for long enough, they change the way the brain works causing extreme problems that take time to be remedied.

Ask yourself the questions below and consider the symptoms of prescription drug abuse.