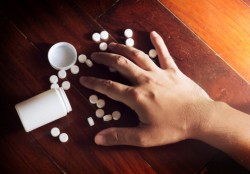 Opiates are highly addictive, and must be taken with great care if at all.

Opiate addictions encompass a wide range of drugs, with heroin and prescription pain pill use driving a steady climb in addiction rates in recent years. Heroin distribution rings have become more efficient and widespread, accounting for a resurgence of heroin abuse.

Likewise, the widespread availability of prescription pain pills within the last decade has placed even more people at risk of developing opiate addiction problems. As of 2009, an estimated two million people reported trying prescription pain pills for non-medical purposes for the first time, according to the Centers for Disease Control & Prevention. When calculated on a daily basis, this number equates to a rate of 5,500 new users per day.

Opiate addictions have long-lasting effects that can persist long after a person stops using drugs. In effect, many recovering addicts remain at risk of relapse for years into the recovery process. For these reasons, opiate addiction treatment uses a range of interventions designed to help addicts overcome addiction’s long-range effects.

While heroin abuse results solely from recreational practices, prescription pain pill abuse can develop regardless of whether a person uses for recreational or medicinal purposes. Some of the more commonly used opiate medications include –

Opiate-based drugs provide an effective treatment for pain resulting from injury, chronic conditions or even temporary pain symptoms. Unfortunately, the way these drugs work pose certain risk when used on a long-term basis.

When used for recreational purposes, prescription pain pills carry just as high a risk for abuse and addiction as heroin. This is especially the case with some of the more potent pain medications like Oxycontin and morphine.

Opiate drugs target certain brain chemical processes, forcing high levels of dopamine, norepinephrine and serotonin into the brain, all of which are essential neurotransmitter chemicals. Opiate materials target specific groups of brain cells, which secrete these chemicals in large amounts.

With continued use, the brain grows dependent on opiate effects to carry out its normal functions. This dependency stems from the ongoing damage done to brain cell sites over time. In effect, brain cells develop a growing tolerance and so require increasingly larger doses. This cycle continues for as long as a person keeps abusing drugs.

Ultimately, ongoing opiate use creates a state of brain chemical imbalance that works to perpetuate ongoing drug use. This state of imbalance drives the addiction cycle.

Throughout the course of a developing addiction, a person’s daily quality of life undergoes considerable decline as the effects of the drug compromise the brain’s ability to work as normal. Without needed treatment help, this condition only gets worse, to the point where serious physical and/or psychological disorders will likely develop along the way.

Signs and Symptoms of Opiate Addiction

Considering the addiction potential associated with opiate type drugs, the best time to get a handle on an opiate addiction is when signs and symptoms of abuse start to develop. For this reason, doctors recommend taking prescription pain pills no longer than three to four months at a time, according to the U. S. National Library of Medicine.

Signs of withdrawal can appear within a person’s physical health as well as within his her psychological make-up. The brain’s ongoing tolerance for more and more opiates only works to aggravate withdrawal effects, which continue to intensify for as long as a person keeps using.

More oftentimes than not, someone experiencing withdrawal will use opiates as a means for self-medicating uncomfortable withdrawal symptoms. In effect, a vicious cycle ensues where continued drug use worsens the brain’s overall chemical balance, which in turn increases one’s cravings for more of the drug.

After so long, the body’s physical dependency morphs into a psychological dependency that drives users to “need” the drug as a means for coping with everyday life. Once a person reaches this point, he or she has become addicted to the drug.

Physical signs of opiate addiction can easily trigger ongoing drug use, especially in cases where a person uses opiates to relief pain symptoms. As the brain’s tolerance level increases, pain symptoms gradually flare up. The experiencing of pain coupled with developing withdrawal effects can quickly drive a person to try to self-medicate.

Physical signs of opiate addiction typically take the form of –

These symptoms will start to occur more often and become more intense the longer a person continues to abuse opiates.

Psychological signs of opiate addiction have more to do with a person’s thought processes, emotions and behaviors than anything else. At this point, a person’s overall personality undergoes considerable change as opiate’s damaging effects warp how the cognitive areas of the brain function.

Psychological signs of opiate addiction may take the form of –

Much like the physical symptoms associated with opiate addiction, a person’s psychological make-up will continue to deteriorate to the point where actual psychological disorders start to take root.

In the most extreme of cases, addicts can develop full-blown psychosis in which they lose touch with reality altogether. These developments can quickly up-end a person’s quality of life and sense of well-being.

Opiate addictions take a considerable toll on a person’s ability to function in everyday life. Even after stopping drug use, many addicts function at a diminished capacity due to long-lasting effects of opiates on the brain.

Opiate addictions develop in stages over time. Likewise, opiate addiction treatment programs treat addiction in stages in terms of addressing the physical components of addiction before treating the psychological aspects.