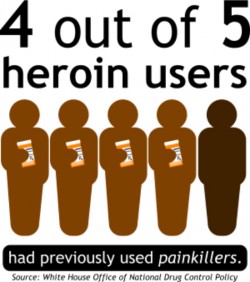 80% of heroin users first used prescription painkillers as their drug of choice.

It would seem that the decrease in prescription painkiller abuse stated by the NLM would be something to celebrate, if it did not also have the potential of being directly linked to a recent rise in heroin abuse. While prescription painkiller abuse is something that has been on the rise and being actively fought by both the government and the medical community for years, heroin abuse actually is increasing after all these efforts.

According to experts in a new study published on January 15th, “The U.S. ‘epidemic’ of prescription-painkiller abuse may be starting to reverse course.” This is especially beneficial to the many individuals who will now know more about the potentially harmful side effects of prescription opioids (like oxycodone, hydrocodone, fentanyl, morphine, etc.) and their high potential for abuse. Though addiction to prescription painkillers still exists in troubling numbers, it is good to see that some of the work being done to reverse this issue is actually making a difference.

However, “researchers also found a disturbing trend: Heroin abuse and overdoses are on the rise, and that may be one reason prescription-drug abuse is down.” The issue suggests that certain individuals are only swapping prescription painkillers for heroin.

Is There a Link Between the Decreased Painkiller Abuse and Increased Heroin Abuse?

There are many times where an individual who is already addicted to opioid drugs might swap heroin for prescription pills or vice-versa. According to CESAR, “Oxycodone, for example, has many similarities to other drugs of abuse including alcohol, heroin, and marijuana,” and one of its common street names is hillbilly heroin. There is already a definite link between different types of opioid abusers, which makes these statistics even more likely to be related.

Some people feel that not prescribing as many licit opioids will cause a decrease in opioid addiction. However, this only means that those who are truly addicted to opioid drugs go looking for whatever else is available to them in order to get their fix. “You can’t get rid of addiction just by decreasing the supply of painkillers,” states Dr. Adam Bisaga, a psychiatrist who specializes in treating addiction patients in New York City.

There is also the issue that “laws and prescribing guidelines,” stated as reasons for the dip in prescription opioid addictions in the study, do not treat addictions that already exist. An individual needs substance abuse treatment, a combination of therapy and medication, in order to fight their addiction; otherwise, they will look for other drugs to abuse, as stated above.

There does seem to be a possibility that many of the individuals who are now not abusing prescription painkillers are, in fact, abusing heroin instead. Though there are other reasons which are helping to cause the former issue to decrease, including prescription monitoring programs, new medications for narcotic addiction, and other beneficial changes, there should be more attention paid to treating addiction as well as preventing it. That way, heroin abuse will, with any luck, make the same type of decline.