Six People Die in the U.S. of Alcohol Poisoning Every Day 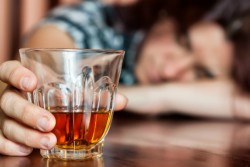 Alcohol poisoning rates are rising primarily for those in the 45-54 age group, a likely consequence of alcoholism.

Alcohol poisoning is an extremely dangerous and widespread problem in the United States today. With the issue of drug abuse, it is sometimes forgotten how common alcohol abuse can be and how dangerous. While alcohol is legal and often much easier to get ahold of, it also causes a high death count, specifically an average of six individuals every day.

As the CDC states, “More than 2,200 people die from alcohol poisoning each year in the United States… according to a new Vital Signs report from the Centers for Disease Control Prevention.” That averages out to six people per day. While alcohol poisoning only occurs when an individual has had a substantial amount to drink, it is still troubling that it happens as often as it does.

More statistics found by the study are also shocking and concern the individuals who are more likely to experience alcohol poisoning and to possibly die as a result.

While college-aged individuals, and especially those in their twenties, are thought of as being more likely to experience alcohol poisoning and other issues as a result of too much alcohol abuse, this age group is not the one with the highest rate of alcohol poisoning deaths.

What causes the increase of alcohol poisoning deaths which doubles in twenty years from the 25-34 age bracket to the 45-54 age bracket? “Alcohol dependence (alcoholism) was identified as a contributing factor in 30 percent of these deaths.” Alcoholism, which is caused by long-term alcohol abuse and includes withdrawal symptoms, a high tolerance for alcohol, and cravings for alcohol, is more likely to be experienced by someone in their middle age who has been drinking for a long time.

Aside from three quarters of the deaths occurring from alcohol abuse involving “adults ages 35-64 years,” most deaths also “occur among men and non-Hispanic whites.” This is not to say that women or people of color are not likely to experience this issue as well. In fact, “American Indians/Alaska Natives have the most alcohol poisoning deaths per million people.”

How Can We Fight These Statistics?

While this study portrays an accurate and haunting account of how dangerous and likely deadly instances of alcohol poisoning still are today, it is important to understand how everyone can make a difference and try to lessen these numbers.