Side Effects and Dangers of Snorting Heroin 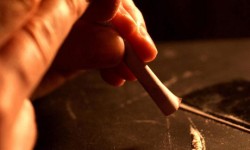 Snorting heroin is likely to lead to many health consequences and should not be viewed as a “safer” alternative to injecting or smoking the drug.

Considering the disease risks involved with shooting up heroin, many drug users have taken to snorting heroin as a “safer” alternative. While snorting heroin does eliminate the risk of contracting HIV and hepatitis, this practice nonetheless comes with its own set of side effects and dangers.

Heroin ingested in any form can cause considerable damage to the brain as well as many of the body’s major systems. This drug’s classification as a Schedule I opiate narcotic means heroin carries an extremely high risk for abuse and addiction regardless of how it’s ingested. Ultimately, snorting heroin offers little to no protection against the damaging effects of this drug.

Snorting, in and of itself, also comes with certain unpredictable risks that users may not be aware of in terms of the time it takes to experience the drug’s “high” effects. This coupled with the inherent risks associated with heroin use in general place drug users at considerable risk of developing both physical and psychological problems, not to mention the ongoing risk of overdose.

Heroin’s physical structure makes for a fat-soluble material that easily crosses the blood-brain barrier. Rather than block heroin from crossing over from the bloodstream into the brain’s extracellular fluid, heroin’s physical make-up allows it to enter the brain’s chemical system unimpeded.

Once inside brain, heroin binds to specialized brain cell receptors that normally bind with the brain’s own natural endorphin chemicals. Upon contact, these receptors convert heroin into morphine-like substances, also known as endorphin neurotransmitter chemicals, according to New York University-Steinhardt.

Neurotransmitter chemicals most affected include:

These chemicals work to regulate any and all bodily processes connected to the central nervous system. Any alterations in chemical levels pose a considerable risk to the brain’s overall functional capacity. With ongoing heroin use, brain chemical levels continue to skew further and further out of balance.

Heroin’s effects on brain cell receptor sites start to take a toll on the cells themselves. Heroin also starts to disrupt the brain’s chemical processes or system in terms of being able to regulate normal bodily functions.

Bodily functions most affected by heroin’s effects include –

Heroin’s combined effects work to weaken brain cell sites to the point where they become less sensitive and responsive to heroin’s presence over time. When this happens, the brain’s tolerance levels for heroin have increased.

For someone who’s come to anticipate the “high” heroin brings, it’s likely he or she will increase the dosage amount in order to produce the drug’s desired effect. Like any other form of heroin use, snorting heroin leads to increased tolerance levels, which account for most, if not all of the dangers that come with heroin abuse.

Side Effects from Snorting Heroin

For the most part, side effects from snorting heroin follow the same course of effects brought on by any form of heroin abuse. These effects develop out of the chemical imbalances heroin incites.

Side effects may take the form of –

With continued drug use, side effects from snorting heroin only get worse as the drug further disrupts the brain’s normal chemical balance.

Compared to smoking and injecting, snorting heroin delivers the slowest drug effect. While a slower effect does make for a less addictive route of administration, it also increases the likelihood of heroin accumulating in the bloodstream.

Under these conditions, a person may not feel the effects of the drug as soon as anticipated and so take another dose to move things along. In effect, he or she ends up ingesting twice as much as intended, which greatly increases the risk of overdose.

Snorting heroin can also open the door to more intense methods of heroin abuse, such as injecting. According to the National Institute on Drug Abuse, an estimated 15 percent of people snorting heroin transition over to IV use in an attempt to experience a more intense “high” effect.

Not surprisingly, snorting heroin opens users up to sinus irritations, especially in cases where heroin batches contain any number of additives and impurities. Sinus irritations can quickly develop into chronic inflammation, which can increase risk of tissue damage as well as actual perforations inside the nasal septum, which separates the nostrils. People affected by asthma-related conditions face even greater risks in terms of having more frequent and severe asthma attacks that may well require hospitalization.

Once dependency sets in, a person starts to experience withdrawal effects on a frequent basis, some of which include –

Heroin’s ability to commandeer brain functions not only warps the body’s physical processes, but also warps the brain’s inner workings. Addiction takes root once a person’s mind becomes psychologically dependent on the drug.

In effect, a psychological dependency means getting and using heroin dictates a person’s priorities, motivations and overall outlook on his or her purpose in life. Once addicted to heroin, the addict’s life starts to spiral out of control.

More than anything else, the overdose risks associated with snorting heroin pose the greatest danger to a person’s well-being. Heroin slowly diminishes the brain’s ability to keep vital bodily processes running. This is especially the case when it comes to the body’s respiratory system.

With a large enough dosage amount, heroin numbs the brain to the point where it no longer sends the necessary signals that keep the respiratory system working. When this happens, respiratory failure can occur, which is the most common cause of heroin-related deaths.