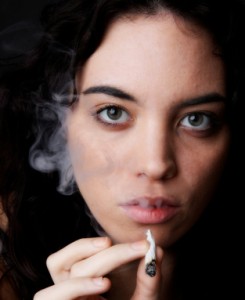 A significant portion of people who try marijuana will become addicted to it.

Marijuana addiction can sometimes be a controversial subject. While marijuana may have less intense physical and psychological effects on users than some other illicit drugs (like methamphetamine, cocaine, heroin, etc.), there is an argument over how harmful the drug can actually be and if marijuana addiction is even possible.

According to many studies, marijuana does cause tolerance, dependence, withdrawal symptoms, and many other issues that are associated with an addiction syndrome. The NIDA states, “Over time, overstimulation of the endocannabinoid system by marijuana use can cause changes in the brain that lead to addiction.” There are also signs and symptoms that are associated with marijuana addiction, and treatment may be necessary for those who experience severe addiction to marijuana.

As stated by the NIDA, “It is estimated that 9 percent of people who use marijuana will become dependent on it.” Those who begin abusing marijuana when they were young, usually as teenagers, are especially susceptible to the possibility of addiction to and dependence on marijuana, as are those who abuse the drug every day. The numbers correspond to 17 percent and 25 to 50 percent of these specific users, respectfully.

Marijuana addiction does occur, and many individuals do experience issues as a result of their marijuana use and are still unable to stop abusing the drug, even when they want to. Most commonly, marijuana is smoked but it can also be ingested. “The main psychoactive (mind-altering) chemical in marijuana, responsible for most of the intoxicating effects sought by recreational users, is delta-9-tetrhydro-cannabinol (THC)” (NIDA). While the severity of marijuana addiction can vary depending on the individual, there are clear signs that point to marijuana addiction.

If you’re concerned that your loved one might be addicted to marijuana, look for the clearer signs. A marijuana smoker may not be addicted just because they smoke or smoke often; addiction occurs when an individual cannot stop taking a drug without some sort of help. This is usually apparent when the person attempts to stop smoking marijuana and cannot do so on their own.

Some of the other signs of marijuana addiction are:

These issues are all noticeable as long-term marijuana abuse signs. It is also important to watch for the signs of marijuana intoxication which, although by themselves are not a definite indicator of marijuana addiction, will likely be constant in someone who is addicted to the drug. These are:

Ask yourself if your marijuana use has caused any of the issues below to occur in your life, and then consider whether or not you may need formal addiction treatment for marijuana.

If you answered yes to these questions, you may have an addiction to marijuana. The best course of action you can take is to ask your friends and family for their support and to seek out a treatment program that would be best for you.

For those seeking addiction treatment for themselves or a loved one, our Using.com helpline is a private, convenient solution.

Calls to any general helpline (non-facility specific 1-8XX numbers) for your visit will be answered by an admissions representative of Treatment Management Company, a paid sponsor of Using.com, to help determine whether their treatment programs are an option for you.

Calls to any specific treatment center listed within our directory are answered directly by those facilities.

Our helpline is offered at no cost to you and carries no obligation to enter into treatment. No commission or other fee is ever paid to Using.com that is dependent upon whether you enter treatment, or which treatment provider you ultimately choose.