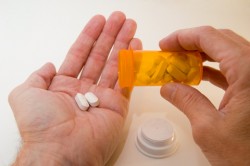 Hydrocodone and any hydrocodone combination medicines are very addictive and must be taken with extreme caution.

Hydrocodone, while being a medication that can be combined with other drugs like aspirin, acetaminophen, ibuprofen, etc. and a painkiller that can be prescribed for “moderate-to-severe pain,” is also a habit-forming drug that can become addictive if misused (NLM). Hydrocodone addicts must attend treatment in order to get better, and there are many signs and symptoms that can tell you if you or someone you love has a hydrocodone addiction.

According to the NIDA, Vicodin (a combination product containing hydrocodone and acetaminophen) was one of the most prevalently abused prescription drugs by eight to twelfth graders, even higher than the abuse of OxyContin. While there are many forms of hydrocodone-based drugs, any and all can be dangerous and cause addiction in someone who abuses them.

Some other hydrocodone-combination products that are often abused and may cause addiction are:

But how can you know if someone is addicted to hydrocodone?

The abuse of and addiction to hydrocodone can cause many observable signs that may help you discover whether or not your loved one is addicted to the drug. There are specific intoxication effects that will be constantly displayed by someone abusing hydrocodone, although they may not be fully addicted just because they are displaying these signs. According to the NIDA, the intoxication effects caused by hydrocodone are:

If someone is constantly displaying these signs, they are likely abusing hydrocodone and its effects. Hydrocodone intoxication will be common in someone addicted to the drug, but how do you know for sure that they are addicted and not just abusing hydrocodone? Similarly to those above, there will be other behavioral and physical signs of their addiction to hydrocodone, including:

Someone who is abusing hydrocodone recreationally may not want to stop but they will still be able to if they are made to understand that their actions are dangerous. A person who is addicted to hydrocodone will make excuses to continue using it, ignore the problems going on in their life in order to continue abusing hydrocodone, and even hide their drug abuse from others, becoming extremely secretive.

The signs of hydrocodone addiction are severe because the person’s condition will be as well. Addiction causes major changes in the brain so that the person is psychologically and physically unable to stop abusing the drug. With hydrocodone, if someone abuses it enough, this can result, and it can be very difficult to convince the addicted individual that they need help.

If you have been abusing hydrocodone for quite a while, there is a chance that you are already addicted to it. Once addicted, you will notice the symptoms of addiction which will only be noticeable to you. These issues may be:

You may notice that you are willing to do and say things that you weren’t willing to before. For example, someone who abuses hydrocodone recreationally may buy or obtain the drug only when they feel safe to. Someone who is addicted will do anything to get more of the drug (doctor shopping, stealing prescriptions, creating fake prescriptions, etc.). If you are already at the point where you will put yourself into this much danger to obtain hydrocodone, you are definitely addicted. Feeling like you cannot stop on your own, even if you want to, is the strongest sign of drug addiction there is.